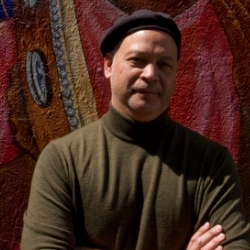 John’s research areas include equity and social justice in the arts. He was the multicultural representative for the Bay Area Section of the California Music Education Association from 2009 -2015 and wrote numerous articles on equity and culturally responsive curriculum for their Tempo magazine during his tenure. Dr. Calloway has been recognized by the Jazz Journalists Association with the Jazz Hero Award in 2012, and by the California Music Educators Association with the Ernest R. Yee Illuminating Culture Award in 2015.

John has been the director of San Francisco State University’s Afro-Cuban Ensemble since 1999.

Dr. John Calloway is a nationally recognized multi-instrumentalist, composer and arranger who has maintained a dual career in education for over 30 years. He is also a community activist and a long-time social justice and cultural advocate, having served as an SF Arts Commissioner from 2008-2013, as the  Entertainment Coordinator for Carnaval San Francisco since 2014,  and currently is on the advisory board for Living Jazz of Oakland, CA.

Known for his prolific work in jazz, Latin American and other World music styles, John has performed and toured with such internationally known jazz musicians as Dizzy Gillespie, Charles Musselwhite, Israel “Cachao” Lopez, Max Roach and Pete Escovedo In the SF Bay Area, with Jesus Diaz, Mark Levine, John Santos and Marcus Shelby. As an arranger and composer, he has written for several GRAMMY-nominated recording projects as well as for films, including the HBO movie “Hemingway & Gelhorn.” John has several recording projects of his own. His latest CD “Asere Ko,” was released in 2016, which is in addition to his two previous recordings “The Code” (2007) and “Diaspora” (2001). Most recently, John wrote and produced the musical “El Son de La Mission,” about the cultural and political history of San Francisco’s Latino district and was a recipient of a 2019 EMMY award as a composer/performer for the commercial “No Hay Nada Mas SF."